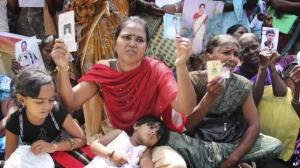 Families of disappeared
COLOMBO, SRI LANKA, February 4, 2016 /EINPresswire.com/ — As the United Nations High Commissioner for Human Rights Zeid Ra’ad Al Hussein begins his three day visit to Sri Lanka, the Transnational Government of Tamil Eelam (TGTE) wrote a letter, urging him to raise with the Sri Lankan Prime Minister Mr. Ranil Wikramasinghe, about his statement that thousands of Tamils who surrendered to the Sri Lankan Security forces are no longer alive. The Sri Lankan Prime Minister made this statement on January 15th in Jaffna, when he spoke at a celebration of Thai Pongal, a Hindu festival. The letter further states that “large groups of Tamil civilians, including women and children voluntarily placed themselves in the hands of the security forces at the end of the conflict in May, 2009 in reliance on assurances that they would be safe and ultimately released. Since then several more have been arrested or have disappeared. According to recent reports abductions and sexual assaults of Tamils are still continuing.” The letter pointed out that “the Sri Lankan Prime Minister’s comments sent shock-waves through the thousands of Tamil families who still do not know the fate of their surrendered loved ones. The families of the disappeared held a hunger strike on February 4th, the Sri Lankan Independence Day, to highlight their plight.” “This new revelation by the Sri Lankan Prime Minister reconfirms the Tamils’ firm belief that Tamils will only get justice through an international mechanism such as the International Criminal Court (ICC), and urged the High Commissioner to request the UN Human Rights Council and the UN Security Council to refer Sri Lanka to the ICC” said the letter. The letter also highlighted the fact that the same security forces that committed these large scale disappearances and other mass atrocities still remain stationed in extremely large numbers in Tamil areas, even after six years have passed since the end of the war. The letter also pointed out that on December 15, 2015, Sri Lanka signed the International Convention for the Protection of All Persons from Enforced Disappearance. Contact: pmo@tgte.org ABOUT TRANSNATIONAL GOVERNMENT OF TAMIL EELAM (TGTE): Transnational Government of Tamil Eelam (TGTE) is a democratically elected Government of a million strong Tamils (from the island of Sri Lanka) living in several countries around the world. TGTE was formed after the mass killing of Tamils by the Sri Lankan Government in 2009. TGTE twice held internationally supervised elections among Tamils around the world to elect 132 Members of Parliament. It has a bicameral legislature and a Cabinet. It held one of its Parliamentary sittings in the British Parliament. TGTE is leading a campaign to realize Tamils’ political aspirations through peaceful, democratic and diplomatic means. The Constitution of the TGTE mandates that it should realize its political objective only through peaceful means. The Prime Minister of TGTE is Mr. Visuvanathan Rudrakumaran, a New York based lawyer. Contact: pmo@tgte.org Web: www.tgte-us.org BACKGROUND: Tamils have faced repeated mass killings since 1958 and the mass killings in 2009 prompted UN Secretary General Ban Ki-moon to appoint a Panel of Experts to report on the scale of killings. According to UN internal review report on Sri Lanka, over 70,000 Tamils were killed in five months in early 2009 and Tamil women were sexually assaulted and raped by Sri Lankan Security forces. There are over 90,000 Tamil war widows and thousands of Tamils disappeared due the conflict. According to this UN Panel, the killings and other abuses that took place amount to war crimes and crimes against humanity. Independent experts believe that there are elements of these abuses that constitute an act of genocide. Members of the Sri Lankan security forces are almost exclusively from the Sinhalese community and the victims are all from the Tamil community. A Buddhist Monk shot and killed a Sri Lankan Prime Minister 1959 for having talks with Tamil political leaders to find a solution to the ethnic conflict. Tamils overwhelmingly voted in a Parliamentary election in 1977 to establish an independent and sovereign country called Tamil Eelam. This Parliamentary election was conducted by the Sri Lankan Government.