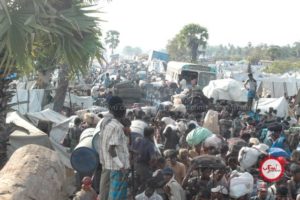 Transnational Government of Tamil Eelam (TGTE) is pleased to announce that Mr. Ladu Jada Gubek, who played a major role in South Sudan’s independence will deliver 5th Mullivaikal Memorial Lecture on May 18th in Philadelphia, USA.

The Memorial Lecture is named after the location called Mullivaikal, where according to the UN Internal Review Report around 70 thousand Tamils were killed and hundreds of Tamil women were sexually assaulted and raped by the Sri Lankan Security Forces during the final six months of the war that ended in May 2009.