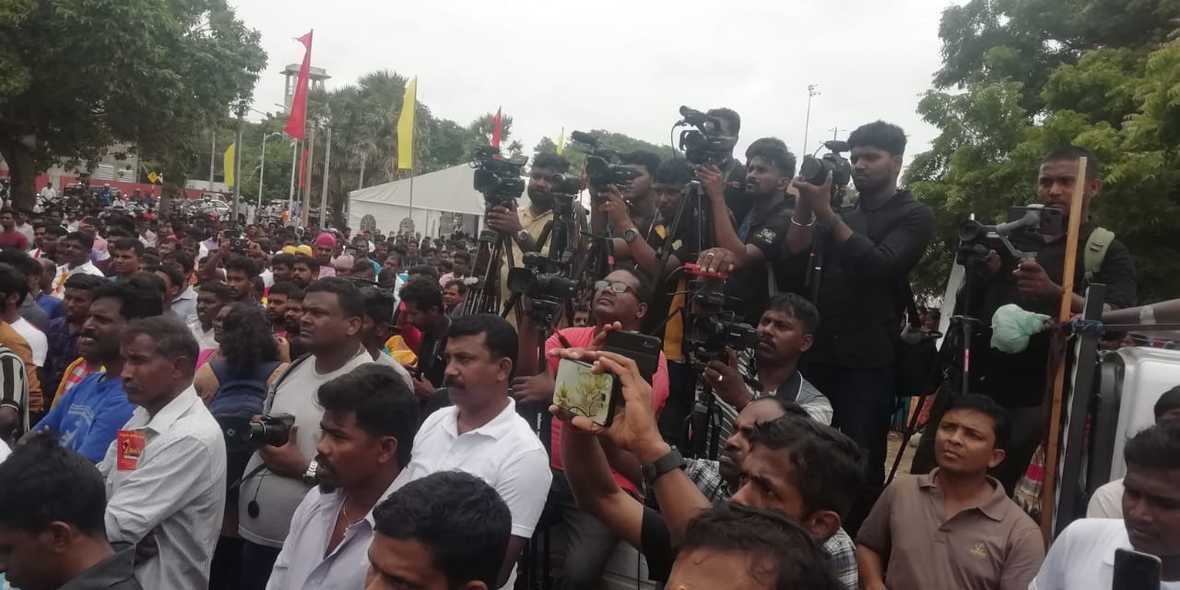 In light of the police-facilitated mob violence perpetrated with impunity against Tamil lawyers outside the Mullaitivu Magistrate court in North-East Sri Lanka on Monday, September 23, 2019, as well as the state-sanctioned and police-facilitated open public defiance of a court injunction that precipitated the assault, Transnational Government of Tamil Eelam (TGTE)has launched a petition calling on the United Nations Special Rapporteur on the Independence of Judges and Lawyers, Mr. Diego García-Sayán, to secure a country visit to Sri Lanka without delay in order to investigate, document and report on the historic and ongoing gross violations of the independence of Tamil judges and security of Tamil lawyers, in the island of Sri Lanka.

“The events of September 23rd were not an isolated incident but rather only the most recent episode in Sri Lanka’s long history of blatant disregard for the rule of law, the separation of powers, and human rights when it serves the Buddhist Sinhalese ethnocratic state agenda,” said TGTE Prime Minister Visuvanathan Rudrakumaran. “These events have provoked moral anger among lawyers and human rights activists worldwide.”

“We cannot let these actions go unanswered. An attack on an Eelam Tamil lawyer is a threat to all Eelam Tamil lawyers to perform their legal obligations. The international community, especially institutions that consider themselves human rights guardians, cannot afford to turn a blind eye in this matter. Silence in the wake of events like these is what allows impunity to reign.”, Mr. Rudrakumaran added.

The specific court injunction defied was one prohibiting the administration of Buddhist funeral rites on the grounds of a Hindu temple in Mullaitivu, part of the traditional Tamil Homeland. The Sri Lankan police sent to the area did not take any action to prevent the criminally-intended group of Buddhist adherents from successfully violating the injunction. Instead, Sri Lankan police escorted the group as it carried out the prohibited funeral rites and also barred Tamils from entering the area. Then, when members of the group harassed and physically attacked the Tamil lawyers present who had worked to secure the injunction and who attempted to question why the cremation was proceeding despite the legal order, the police merely watched. It is elucidating that, as reported in the Tamil Guardian, one monk “taunted the Tamil objectors by stating that Buddhist monks held supremacy in Sri Lanka.”

“Deploying dozens of police to assist a group of civilians in openly, knowingly and purposefully violating a court order prohibiting the cremation of a Buddhist monk on the sacred grounds of a Hindu temple frequented by Tamils is an unmistakable demonstration of Sri Lanka’s hostility toward both democracy and the Tamil People,” Mr. Rudrakumaran added. “The circumstances surrounding the September 23rd assault of Tamil lawyers and the related court order violation evince the fact that when the judiciary issues a decision following the law, if it is favorable to Tamils, there is no space within the island to implement it.”

Also important to note in understanding how this day’s events evince the systemic interference of the executive branch, police and military with the judiciary is that the group that openly defied the court injunction while under police protection on September 23rd was led by the extremist Buddhist monk Gnanasara, Secretary General of the Buddhist nationalist organization Bodu Bala Sena. The fact that Gnanasara had recently been released from prison after being pardoned by the President for his contempt of court conviction provides yet another example of the Sri Lankan executive branch interfering with the independence of the judiciary.

Given Sri Lanka is not a democracy, but rather an enthnocracy that continues to protect and empower individuals implicated in crimes against Tamils, TGTE’s petition also urges U.N. Special Rapporteur García-Sayán to investigate and document Sri Lanka’s systemic judicial ethnic bias.

“In Sri Lanka, there are two systems of justice—one for Buddhist Sinhalese and one for Tamils—or rather, one system of justice and a second of injustice, which will never deliver justice to Tamils for state crimes committed against them, from the murderous riots of 1958 and the atrocity crimes during the conflict through crimes, including torture and the assault of Tamil lawyers, ongoing today,” Mr. Rudrakumaran said.

“Without ongoing international scrutiny, the threat and assault of Tamil lawyers, and the violation of court orders that favor Tamils will continue to be the state’s modus operandi. The judiciary will continue to deny Tamils in Sri Lanka justice and impunity will reign. Without a report from the UN to the contrary, Sri Lanka will continue to claim to be a compliant UN Member State all the while violating internationally-embraced norms fundamental to democracy, the rule of law, and human rights,” Mr. Rudrakumaran said. “It is our hope that, as a fellow human rights defender, Special Rapporteur García-Sayán will heed our petition’s call.”