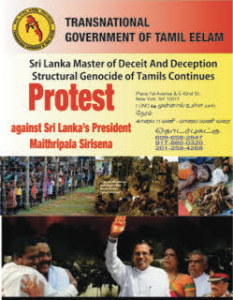 “As acting Defense Minister during the war – President Sirisena is considered a suspect for committing war crimes and crimes against humanity against Tamils” NEW YORK, USA, September 17, 2017 /EINPresswire.com/ —

Transnational Government of Tamil Eelam (TGTE) announced today that it will hold a protest against Sri Lankan President Mr. Maithripala Sirisens’s visit to the UN on September 19th, to speak at the UN General Assembly.

The protesters will highlight Sri Lankan President Sirisena’s role in the killing of Tamils and rape of Tamil women by Sri Lankan Security forces under his command, when he was serving as the acting defense minister during the final weeks of the war.

It was during his time that Sri Lanka rejected appeals by world leaders to stop shelling and bombing an area called “No Fire Zone”, which was created by the Sri Lankan Government, where thousands of Tamil civilians assembled for safety.

President Sirisena in his own words: “I was the Minister in Charge of Defence during the last two weeks of the war in which most of the leaders of the LTTE were killed with General Fonseka at the helm of the Army. Prior to that I have acted as the Minister of Defence five times during the height of the war.” Maithripala Sirisena’s Interview to Daily Mirror, January 2, 2015. Source: http://dbsjeyaraj.com/dbsj/archives/36931

Here is what Economist wrote: “Sirisena is hardly a beacon of hope for the Tamils: he was acting as defence minister in the nightmarish final fortnight of the war” Source: http://www.economist.com/news/leaders/21637389-encouragingly-mahinda-rajapaksa-faces-real-battle-win-re-election-president-better

HERE ARE SOME FACTS:

• Around 70,000 Tamils were killed in six months and women were sexually assaulted and raped by Sri Lankan Security Forces in 2009. (Source: UN Internal Review Report on Sri Lanka). Tamils were killed due to deliberate and intense shelling and bombing of areas designated by the government as “no-fire zones”, where Tamil civilians had assembled for safety. Sri Lankan Government also restricted food and medicine for Tamils, resulting in large numbers dying from starvation and many of the injured bleeding to death.

• A recent report by the International Truth and Justice Project (ITJP) published details of Sri Lankan Military run “rape Camps”, where Tamil women are being held as sex slaves. This is one of the rare documented “Rape Camps”, since Japanese Imperial Army held mostly Korean and Chinese women as “Comfort Women” during the Second World War.

• There are 90,000 Tamil war widows, living among the same Security forces who killed their loved ones. (Source: May 2012 report by British Foreign and Commonwealth Office on Human Rights and Democracy).

• No one was held accountable for the repeated mass killings of Tamils since 1958. Members of the Sri Lankan Security forces are almost exclusively from the Sinhalese community and the victims are all from the Tamil community

Transnational Government of Tamil Eelam (TGTE) is a democratically elected Government of a million strong Tamils (from the island of Sri Lanka) living in several countries around the world. TGTE was formed after the mass killing of Tamils by the Sri Lankan Government in 2009.

TGTE held two internationally supervised elections among Tamils around the world to elect 132 Members of Parliament. It has a bicameral legislature and a Cabinet. It held one of its Parliamentary sittings in the British Parliament.

TGTE is leading a campaign to realize Tamils’ political aspirations through peaceful, democratic and diplomatic means. The Constitution of the TGTE mandates that it should realize its political objective only through peaceful means.