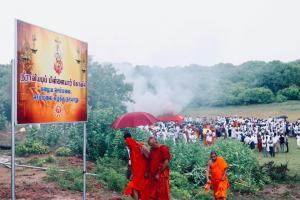 Sri Lanka: Buddhist Monks Invaded a Hindu Temple and Desecrated it, Despite a Court Ban. UN Urged to Act: TGTE

UN urged to ensure that Hindus are free to worship, without harassment and threats by the Security forces and Buddhist Monks.

Barely a month after the visit of UN Special Rapportur’s visit to Sri Lanka, a group of senior Buddhist monks from the South of Sri Lanka invaded a Hindu Temple in the Northern town of Mullaitivu with the protection of security forces and desecrated the Temple by cremating a senior Buddhist Monk’s body in the Hindu Temple premises, despite a court order banning this act.

Hindus consider their Temples a holy place and don’t cremate their dead bodies in a Temple.

The cremation took place on Monday (23rd). The Temple priest, civilians and Lawyers who brought the Court order banning the cremation were attacked and sustained injuries. Some were admitted to the hospital.

Thousands of Tamils held a protest rally the day after the cremation on Tuesday (24th) in Mullaithivu. It was joined by several Catholic Fathers and former Northern Province Council Chief Minister Justice C.V. Wigneswaran.

In an urgent appeal to UN High Commissioner for Human Rights, UN Special Rapporteur for religious freedom and to members of the UN Human Rights Council, Transnational Government of Tamil Eelam (TGTE) urged them to act as a matter of priority to ensure that Hindus are free to worship, without harassment and threats by the Security forces and Buddhist Monks.