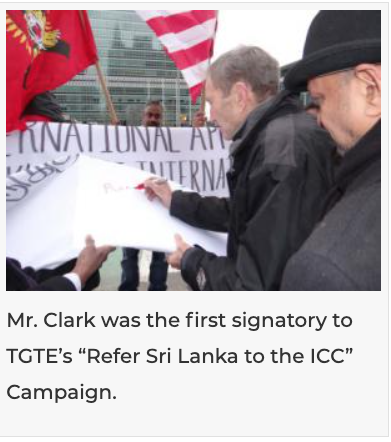 Mr. Clark served as lead counsel in representing the Liberation Tigers of Tamil Eelam (LTTE) in its legal challenge to the US government designating the group a “foreign terrorist organization”.”— Transnational Government of Tamil Eelam (TGTE)NEW YORK, UNITED STATES OF AMERICA, April 15, 2021 /EINPresswire.com/ —

An ardent supporter of the Tamil struggle to achieve justice and to establish an independent and sovereign state of Tamil Eelam, Mr. Clark was a cherished Eelam Tamil ally. We express our heartfelt condolences to his family and hold their hands in the spirit of solidarity.

In his capacity as an attorney, he served as lead counsel in representing the Liberation Tigers of Tamil Eelam (LTTE) in its legal challenge to the US government designating the group a “foreign terrorist organization”. Mr. Clark argued before the US Court of Appeals for the District of Columbia that the LTTE is not a foreign terrorist organization but rather a de facto government, and that the LTTE’s armed struggle was in accordance with the international law principles of self- determination, self-defense, and self-help.

Mr. Clark was of a firm believer that the LTTE is a National Libertarian Front and an authentic representative of the Eelam Tamil People. He was never shy of stating the above in his public speeches or in private conversations with fellow lawyers and academics. Mr. Clark also provided legal advice to individuals charged in India in connection with the LTTE.

Mr. Clark voiced his opposition to the brutal killings of the Tamils during the final stages of the war and participated in a protest organized by the U.S. Tamil diaspora. He concluded a week hunger strike undertaken by five Eelam Tamils in New York.

After the mass killing of Tamils by the Sri Lankan state in 2009, Mr. Clark was one of the driving forces behind the creation of TGTE. Among his many contributions to forming the organization, Mr. Clark served as the TGTE’s New York Election Commissioner for its first parliamentary elections in 2010.

“Ramsey took his position as Election Commissioner seriously. He insisted, for example, that the ballot boxes be brought to his house,” Mr. Rudrakumaran recalled. “In approaching the task with such conscientiousness, he not only showed his character and integrity, but also great respect for Eelam Tamils and a deep appreciation for the need for TGTE amid international inaction.”

Mr. Clark also attended the TGTE’s inaugural meeting at Constitution Hall in Philadelphia and served as a TGTE Senator for the last ten years.

“Ramsey was man of great conviction and generosity. Believing in our cause so wholeheartedly, he refused to accept TGTE’s offer to pay for his train ride from New York to Philadelphia so that he could be with us for our first meeting,” Mr. Rudrakumaran remembered.

In 2013, he participated in the promulgation of Tamil Eelam Freedom Charter and addressed the event.

In 2015, on May 18 – Tamil National Day of Mourning – Mr. Clark delivered TGTE’s inaugural annual Mullivaikal Memorial Lecture, which marks the genocide of Tamils by Sri Lanka during the final stage of the conflict.

Mr. Clark also was the first signatory to TGTE’s global “Refer Sri Lanka to the ICC” campaign, which garnered more than a million signatures within the first three months and was launched outside the United Nations, where Mr. Clark signed the petition. He also showed his solidarity with the Eelam Tamil plight by attending TGTE fundraising events.

Mr. Clark also was one of the petitioners challenging the Sixth Amendment to the Sri Lankan Constitution, which criminalizes peaceful advocacy for an independent Eelam Tamil state, violating the fundamental democratic and human rights principles of freedom of speech and freedom of association enshrined in the Universal Declaration of Human Rights, which was adopted by the UN General Assembly in 1948 and affirms the universal character of the freedoms and rights that it details as “inherent” and “inalienable.”

“I had the great privilege of associating and working with Ramsey for the past 25 years. He was not only my comrade, but also a fatherly figure for me.” Mr. Rudrakumaran said. “His memory will continue to guide me personally, as well as all Eelam Tamils as we persevere in our pursuit to achieve justice and freedom.” Transnational Government of Tamil Eelam 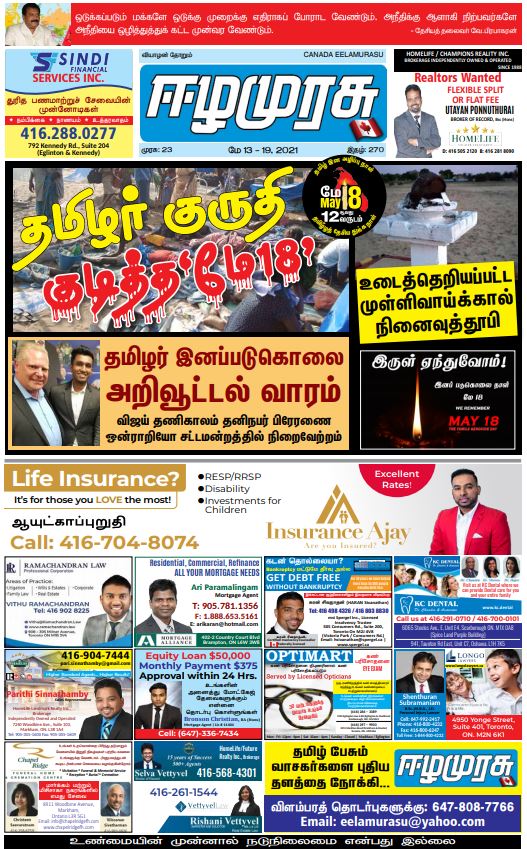