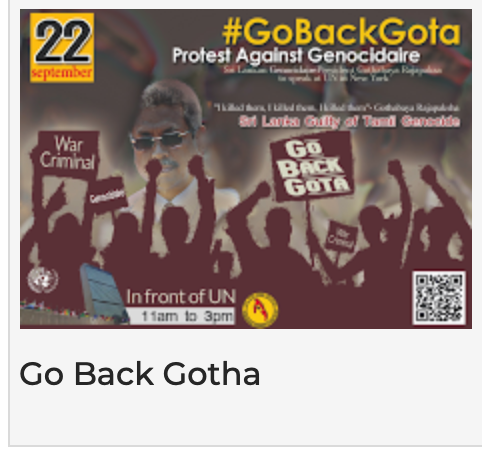 Gothabaya was the Defense Secretary when According to UN Tens of Thousands of Tamils were Killed and Tamil Women were Raped by the Sri Lankan Security forces”— Transnational Government of Tamil Eelam (TGTE)UNITED NATIONS, NEW YORK CITY, UNITED STATES OF AMERICA, September 19, 2021 /EINPresswire.com/ — With “# Go Back Gota “ Slogan there will be a rally outside the UN in New York, when Sri Lankan President Gothabaya Rajapaksa was addressing the UN General Assembly on September 22nd. The Rally will highlight Sri Lankan Presidents Leadership Role in Committing Genocide, War Crimes and Crimes Against Humanity against the Tamil people.

Transnational Government of Tamil Eelam (TGTE) is also sending information to the UN member States about Gotabaya’s Leadership Role in Committing Atrocity Crimes against the Tamil people in Sri Lanka.

SOME OF THE ATROCITY CRIMES COMMITTED AGAINST TAMILS WHILE GOTHABAYA RAJAPAKSE WAS SERVING AS DEFENSE SECRETARY ARE: