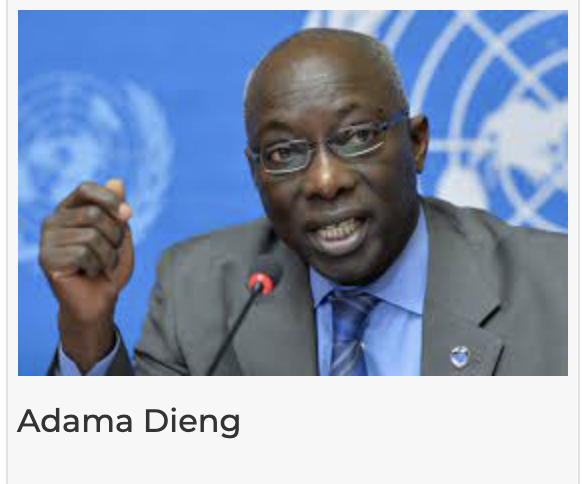 Former UN Secretary General’s Special Adviser on the Prevention of Genocide, Adama Dieng forewarned the Sri Lanka government stating that “In absence, of willingness and commitment of the government to pursue accountability, promote reconciliation and recognize the suffering of victims, it is evident that, international route remains a realistic way of achieving justice for the victims in Sri Lanka.”

His Excellency Adama Dieng, delivered the Seventh Annual Mullivaikal Memorial Lecture on May 18 afternoon, immediately following the official opening of the memorial ceremonies led by the Prime Minister of the Transnational Government of Tamil Eelam Viswanathan Rudrakumaran in New York.

Due to the Covid-19 situation, the event was held on the virtual platform and was live streamed on TGTE TV. https://youtu.be/6-8nwN3A-2w

Mr. Adama Dieng who visited Sri Lanka in 1998 was a member of the the International Commission of Jurists (ICJ) an organization he said he had the privilege to lead as Secretary General. In early 1980s ICJ commissioned a report on “Ethnic Conflict and Violence in Sri Lanka”. In this Report, he observed “ICJ made a careful survey of the background, causes and nature of ethnic violence in Sri Lanka. ICJ also examined legal and administrative measures adopted by the government to address them. Its little wonder then that, issues and challenges ICJ noted by then are still at the centre of ongoing challenges engulfing the country today. As noted almost forty years ago, inability and unwillingness of the government of the day to pursue credible route to reconciliation among its diverse members of its polity, investigate and punish those who commit serious violations of national and international law and recognize the suffering and humiliation endured by the victims, continue to haunt this country.”

Adama Dieng lamented the fact that more than a decade on from the end of the war in 2009, the Sri Lankan government has failed to make any credible and meaningful progress towards accountability for international crimes, reparation for victims for harm suffered, or accountability for disappearances and other abuses. He recalled “Today, we gather to mourn the thousands of civilians’ lives lost and we honor those who survived. Remembering these victims, the tens of thousands of civilians who died during the war in Sri Lanka, challenges us all to do more – to fight for the shared justice goals and to prevent past from repeating.

Mr. Adama Dieng pointed out that the Mullivaikal Memorial serves as a reminder of victims of war wherever they are. In remembering the people of one community, we remember all communities affected by armed conflict. Memorialization of the past is important for the future. Honouring not only the suffering but also the resilience and dignity of victims creates spaces for learning and dialogue about legacies of violence. Twelve years after the end of an armed conflict in Sri Lanka, justice remains elusive for Mullivaikal victims and other survivors in Sri Lanka. At the same time, victims, and their families despite tremendous burden, involving security risks, social risks, economic costs continue to fight for justice and accountability.

He underlined the fact that Key UN human rights bodies including the General Assembly and Human Rights Council (HRC) have undertaken wide range of initiatives to push for accountability in Sri Lanka, yet it is true that no measures have yielded outcome that we would all desire to achieve especially on accountability and recognition of the victims in this country. I am pleased that few weeks ago, the HRC in its sitting in Geneva, adopted a resolution mandating the High Commissioner to investigate and preserve evidence for possible accountability in the future. It is my sincere hope that, these efforts will result into a real accountability for those responsible for heinous crimes committed against people of this country.

Commenting on the most recent situation in Sri Lanka he said: “We stood together to express concern over the alarms raised in the UN High-commissioner for Human Rights report on Sri Lanka regarding, specifically: the militarization of civilian government functions (including the appointment and promotion of senior military officials identified in earlier UN reports as perpetrators of alleged war crimes and crimes against humanity during the final years of the conflict); the reversal of constitutional safeguards (which undermine, among other things the independence of the judiciary and key oversight commissions on the police and human rights); new sources of political obstruction of accountability for crimes and human rights violations (including by new Commissions of Inquiry that have intervened in ongoing cases); an increase in majoritarian rhetoric and exclusionary policies targeting Tamil and Muslim communities; unceasing surveillance and intimidation of civil society and shrinking democratic space (including the continued use of the draconian Prevention of Terrorism Act, despite years of commitment to its repeal and replacement by an Act complying with international standards).

Speaking of the recent spate of violence against Muslims he said that we must also recognize that over the last 10 years since the end of the conflict, the Muslim community has been at the receiving end of the growing Sinhala Buddhist nationalism, challenging the identity and existence of the Muslim community. Whether it is the riots of Aluthgama in 2014, the Kandy riots of 2018 or the aftermath of the Easter Sunday attacks, the Muslims have been on the receiving end. Noting what they have been experiencing, including haphazard detentions and harassment, One can say that there is a point of synergy and alignment between the Muslim community and the Tamil community

He further explained that with the case of the Muslims, it appears to be a clash for very existence. But what this means is that the fate of minorities in Sri Lanka is at a critical juncture. With the rise in extreme Sinhala National Buddhist thinking, no minority (religious or ethnic) is safe and we face something similar to what the Myanmar state is going through. So there has to be a coming together for minorities to really tackle the clear and present danger in Sri Lanka and that is a descent into majoritarian autocracy where no minority is safe.

Connecting this to the COVID-19 situation he illustrated that the pandemic has also impacted on religious freedom and exacerbated the prevailing marginalisation and discrimination suffered by the Muslim community. There has been concerns about the Government of Sri Lanka’s decision to mandate cremations for all those affected by COVID-19. This has prevented Muslims from practicing their own burial religious rites, and has disproportionately affected religious minorities and exacerbated distress and tensions. Sri Lankan Muslims have also been stigmatized in popular discourse as carriers of COVID 19.

The Tamils also have to reach out to the Muslims and vice versa and trust needs to be built. What happened to the Muslims during the conflict particularly in the 1990s has to be acknowledged. Justice for the Tamils in Sri Lanka means justice for all Sri Lankans. Due to structural inequalities, discrimination and gendered-power dynamics, data has shown that women trust less than men in all types of key institutions (distrust is highest in Government and business sectors).

While appreciating the High Commissioner’s preventive focus as we are all aware that in 2009 the international community failed Sri Lanka he warned that we must not fail again.

In Sri Lanka, today, unfortunately a sincere commitment to reconciliation on the part of the authorities remains lacking.

Concluding his address, he remarked : States have the primary responsibility to bring justice for crimes committed on their territory – but the international community cannot ignore that Sri Lanka today is not ready to provide victims with any form of credible redress. Insofar the culture of denial prevails in Sri Lanka, the international community will have to look at other alternatives: prosecutions under universal jurisdiction, targeted sanctions and any other measure that could dent, if only slightly, the armor of impunity.

He said that he firmly believes that documentation and memorialisation, such as Mullivaikal is an integral part of the human rights response to mass atrocities. while memory processes do not replace mechanisms for truth, justice, reparation, “without memory, the rights to truth, justice and full reparation cannot be fully realized and there can be no guarantees of non-recurrence.”

Like all societies, Sri Lanka has to confront its past in order to move forward. It needs to put victims and their dignity first and recognize the injustices and sufferings of victims, their families, and communities. Denial of the past is an easy option, but it damages the basic values on which society can bebuilt and thrive.

BELOW, PLEASE FIND THE LINK TO THE FULL TEXT OF HIS ADDRESS: https://www.tgte-homeland.org/2021/05/21/seventh-annual-mullivaikal-memorial-lecture-virtual-18-may-2021-tgte-delivered-by-h-e-mr-adama-dieng/ 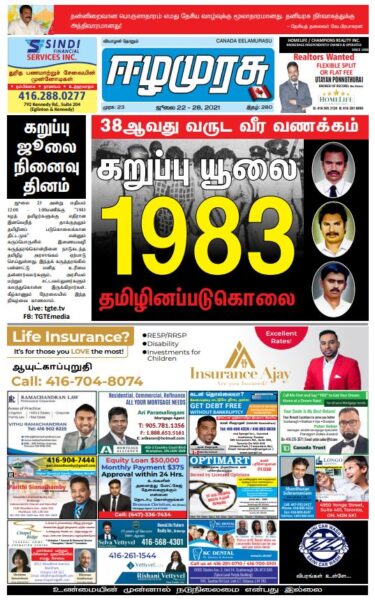